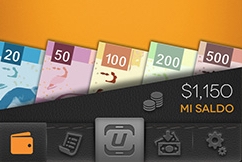 Paul Coppinger, a veteran of the US payments industry, had an epiphany when he was traveling abroad. He saw that countless people around the world don’t have access to the banking system but do have smartphones. Why not combine prepaid funds and wireless transactions, he thought, to create a whole new payments system for emerging economies?

And that’s how Coppinger – an entrepreneur, technology maven and former president of wireless processor Apriva – came to start Unipagos two and a half years ago in Mexico City. Unipagos, which translates as “unified payment” or “universal payment,” enables the unbanked and the underbanked to pay online and offline with smartphones.

Consumers can prepare their mobile devices to make payments by downloading a free Unipagos app from an online app store, Coppinger said. They can transfer funds to their devices at bank BRANKHES, ATMs or through participating merchants, he noted. The product relieves users of the need to carry large amounts of cash and enables them to make online purchases and pay bills online without the expense of a bank account.

Merchants also download the free Unipagos app from app stores to accept the payments, Coppinger said. They don’t need any additional software or extra hardware – such as readers or terminals – to make the transactions. Merchants find that the product affords them the increased sales and larger average tickets that credit and debit cards bring them, he said.

Unipagos works not only for payments to e-merchants and at bricks-and-mortar stores but also for utility payments, person-to-person transactions, unattended payments and bank transfers, Coppinger said. The company is working with Mexico’s largest companies in every category of retailing, he maintained.

Coppinger declined to say how much merchants pay for the service, but he contended that the flat fee his company charges amounts to much less than the interchange fees they incur with credit cards. He said he can keep prices low because the product is so secure that there’s no need to build in a financial cushion for risk.

Unipagos payments aren’t as susceptible to fraud as card payments because Unipagos doesn’t require sharing personal data that hackers can steal, Coppinger said. That frees merchants from the need to comply with the rules, questionnaires and tests of the Payment Card Industry Data Security Standard to protect transactions, he maintained.

The smartphone transactions have a multifactor system that relies on a physical factor – in this case, the device itself – and a knowledge factor in the form of the PIN the user punches into the device. The third possible type of factor – biometrics – isn’t needed because the first two provide enough protection, Coppinger said.

“The only way to steal cash from an account is to put a gun to someone’s head and make them type in the PIN,” he asserted. “And you’d have to do it a lot of times to make much money.”

The Results, So Far

So far, Unipagos is operating only in Mexico, where market penetration “remains in the single digits” but is growing by 50 percent monthly, Coppinger said. He declined to provide the number of merchants or the number of consumers who have signed up for the service, but he said equal numbers of both groups are participating.

Whatever the numbers are at this point, the product’s potential seems enormous in Mexico because so many of the nation’s residents consider smartphones status symbols and love to display the latest models, Coppinger said. “The social phenomenon that we see is a love affair with smartphones,” he added.

Residents of Mexico usually don’t have laptops but appreciate the information they can obtain online. Thus they use their smartphones for data slightly more than consumers north of the border, further endearing them to their devices, Coppinger said.

The need for electronic payments in Mexico strikes Coppinger as enormous, too. Banks there charge so much for their services that using them makes sense only for the wealthy, Coppinger noted. The funds that ordinary Mexicans place in checking accounts can quickly disappear as fees mount up, he observed.

Mexican consumers’ enthusiasm for smartphones and their understandable reticence to patronize banks have not been lost on the Mexican government. Its leaders also recognize that cash plays a role in criminal activities, making electronic payments a crime-fighting tool because it replaces currency.

Mexico has consequently eased restrictions recently to allow companies that aren’t banks – such as Unipagos – to offer payment options and accept deposits, Coppinger said. Meanwhile, Mexican government public-interest websites are providing information on Unipagos to promote the product. That exposure, along with acceptance in the press, has augmented the company’s marketing efforts, he said.

The benefits flow both directions between Mexican society and the company, according to Coppinger. He considers Unipagos part of a new breed of companies with a social mission as well as a profit motive. “We’re providing the lower part of the economic pyramid with the same advantages and efficiencies that today are available only at the top of the pyramid,” he maintained.

Another market that Unipagos is considering lies just across the international border with Spanish speakers in the US, Coppinger said. Talks have gotten underway with potential partners, and a big potential market may await the service. About 13 percent of Americans are unbanked and another 14 percent are underbanked, he said.

And from there? It’s not lost on Coppinger that about 70 percent of the world’s citizens remain unbanked. “So, the potential is enormous,” he said. “It’s highly fragmented, spread out over a large geography and it’s not easy to attack. But that’s the next great frontier.”

10/16/2015 - By Recharge retailer
Interesting article. Helpful for every one. My friend suggest me to use http://paymall.in/
for online billpayment. Its really easy to use.