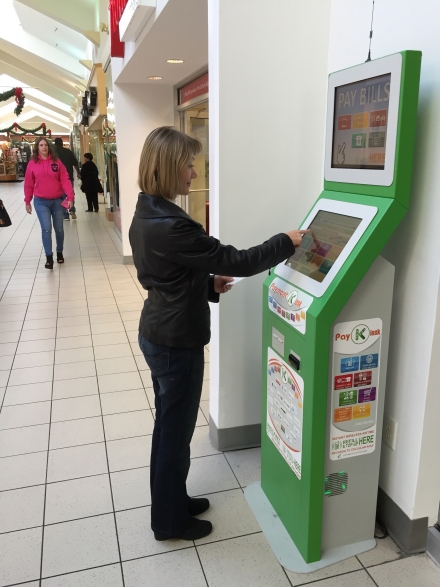 Self-serve kiosks can be powerful tools for the “convenience markets” and for the prepaid market, specifically the unbanked and underserved, who make up about 28.3 percent of all households, according to federal studies.

Just like the vending machine that serves up candy bars and chips, transaction kiosks are turning up in places that attract lots of customers shopping for consumer staple items and electronics. Now they can easily pay their bills while shopping or top up their phones.

As an example, customers at thousands of Walgreens stores will now be able to pay their bills via bill-payment kiosks. These kiosks are being deployed as part of a partnership between the retailer and Western Union, according to a report from Drug Store News.

“Any retailer in the prepaid space can benefit by offering bill pay, wire transfer, phone reloads, gift cards, and other prepaid products,” said Bob Frimet, a certified anti money laundering specialist with many years of experience as a retailer in the prepaid space. “The kiosk offers cash control and security, and it doesn’t take counterfeits. It’s a win-win for the consumer and the store owner.”

Frimet sees a need for kiosks in the growing prepaid market. In the wire space, six million households send money over country lines to Latin America, Asia, Europe and Africa.  Bill pay (prepaid) in cash accounts represents over 500 million transactions per annum, and let’s not forget cell phone use with an estimated 22 billion airtime minutes purchased to make international calls or top up international phones abroad and an estimated 10 billion minutes purchased domestically.

“This is just the tip of the iceberg as 93 percent of all US consumers (banked or unbanked) purchase or receive a gift card at some point in the year for an estimated dollar value of $100 billion+ in spending,” noted Frimet.

The kiosk is proving itself to be a way to house a variety of prepaid products in one place, especially since kiosk technology has been improved. Those machines with robust platform technology have the ability to collect cash, dispense cash, offer a safe environment and reduce staff and lines.

Frimet said that his team developed Kiosk Prepaid, a stand-alone machine that can be leased or purchased. The average lease payment is as little as $300 per month. Kiosks range in price based on the level of services provided and special promotions and incentives are in place, as well as volume discounts.

“The kiosk can be expected to yield 10x plus in revenues over the cost,” according to Frimet. “It services the customer and also meets compliance needs, collects taxes as applicable, and can even be used to sell other items, such as movie or show tickets.”

Kiosk Prepaid is seeking ISOs and distributors and say that locations can earn as much as 70 percent on every dollar earned. The application is geared for many types of verticals, from malls to grocery stores to pawn shops.

Regarding compliance issues, Frimet reminds us that any business that sells or loads open loop gift cards are subject to US Patriot Act regulations and may have to register as an MSB (money service business).

Andrei Mishin, CEO of Payment Terminal Systems (PTS), said that kiosk deployments are picking up as more and more merchants see the kiosk as a big help in growing business revenue and reducing pressure on store managers. Consumers benefit as they can pay all their bills in real time on the go and use cash for small ticket transactions, avoiding the risk of their card information to be exposed online.

“Our strength is that PTS develops its own proprietary software and hardware, with no third party involvement,” said Mishin.

This allows PTS to integrate and support services and devices that customers want to have at kiosks. Desired functions can be customized, depending on the kiosk location, and include phone top-ups and bill payment, check cashing, cash dispensing, card dispensing and loading.

“We’ve learned that for merchant locations, reliability and feasibility are keys to making the kiosk a solution of choice for customers who like to make payments on the go,” Mishin noted. “Our kiosk footprint is only 14 inches deep and 21 inches wide and literally can be placed anywhere a merchant has less than two feet of space with an easy to use menu in English and Spanish.”

Mishin said that the PTS kiosk comes preprogrammed and once plugged in a power outlet can start processing payments in about one minute. Usually payments start from day one, reach maximum capacity in six months, and keep growing as new products are added remotely.

“We consider locations with total payments of $3000+ per month a good location,” said Mishin. “On average, a merchant collects commissions of at least 10 percent of sales, so $300 a month with MSRP for a base PTS kiosk unit set at $2800, return of investment could be less than 10 months.”

What might be holding the kiosk business back? It is still new to prepaid and merchants are not familiar with it and do not know who to trust to lease or buy a kiosk.

Numerous companies tout the concept of kiosks on websites, depicting attractive-looking kiosks that can dispense prepaid products and services, making it sound as easy as pie.

It is easy to sell investors the kiosk concept and make them see its potential value, but there are caveats. Merchants have to look closely to ensure that the kiosk is capable of reliable service, say prepaid providers we talked to. Genuine kiosks with superior platforms can generate serious revenues for distributors, ISOs and end user locations, so look for companies with a proven track record and always ask about a location where you can touch real kiosk processing payments now.

11/29/2015 - By bob
Its clear that with the rise of minimum wage and the need for customer satisfaction, Kiosks will be a big part of mainstream products and services. It's almost to the point where you can't count the number of kiosks on 1 hand at an airport (ticket, electronics, cosmetics, etc). Watch out America! Kiosks are on the way!
04/04/2016 - By Richard
I am in pursuit of the kiosk vending machines to buy and render business in namibia
09/21/2017 - By Shakil
Hi. Please send me more info on these units. Thanks
08/11/2019 - By Nthabiseng
Could you kindly send me a quote on the self service prepaid kiosks. I'm based in South Africa.